With the release of The Blood Curse, the Spell Weaver trilogy is officially complete! Writing the series was an emotional journey into Lyre’s and Ash’s pasts, as well as a chance to finally bring Clio to life and explore the ways she changed Lyre, mind, heart, and fate. I’m so glad readers have enjoyed this dip into Steel & Stone history as much as I did! Now, the question is . . . what’s next?? If you checked out the back matter at the end of The Blood Curse, you’ll already have a glimpse of one project: a new series coming to the Steel & Stone universe! 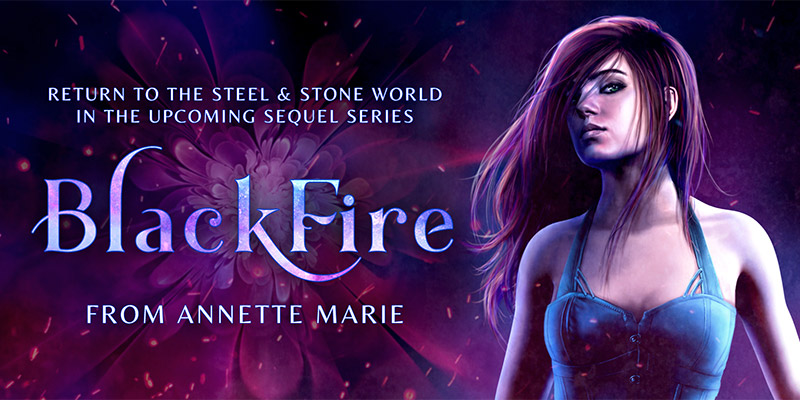 The Blackfire series will take place five years after Unleash the Storm ended, and it will unite Piper, Ash, Lyre, and Clio for the first time. Characters and storylines from both Steel & Stone and Spell Weaver will come together in a new adventure that will change Piper’s world forever. With four main characters, three realms, and nine books to build off of, the sheer scope of Blackfire is new ground for me. It isn’t a project I can rush, and though planning has already begun, the series will require extra development time. Spell Weaver and Steel & Stone have set a high bar for edge-of-your-seat action and magic, and I want to ensure Blackfire lives up to its predecessors. Although I don’t have a release date for the first Blackfire book yet, you can keep up to date through my mailing list and/or by joining my reader group on Facebook.

Blackfire isn’t the only project I have in the works. Coming up next is a brand new urban fantasy—new world, new characters, and new magic!

Meet Tori. She’s feisty. She’s broke. She has a bit of an issue with running her mouth off. And she just landed a job at the local magic guild. Problem is, she’s also 100% human. Oops.

This urban fantasy will feature a world very similar to ours—but with loads of magic hidden just beneath the surface. Mages, sorcerers, witches, demons, shapeshifters, and more . . . plus a human heroine who’s about to find herself in waaaay over her head. The first Guild Codex book is already underway, and I’m having a blast writing it! This series will have tons of adventure, humor and attitude, cool magic, and a fun, intriguing world with so much to discover. I can’t wait to introduce the sassy female lead, Tori—and several sexy heroes who’re going to get her into all sorts of trouble. The first book is planned for release in early fall, and the second will come out before Christmas!

— Posted in Announcements and Blackfire, GuildCodex